One of the jewels of the Anglican Use that is preserved in the Book of Divine Worship is the Pascha Nostrum, or Easter Anthem, appointed for use in place of the Venite throughout the Octave of Easter, and permitted as the invitatory throughout the Easter season. It is one of the premier examples of the way in which the Prayer Book tradition has preserved ancient Catholic practice, the practice of an Easter procession with anthem and alleluia being attested to in medieval English practice. 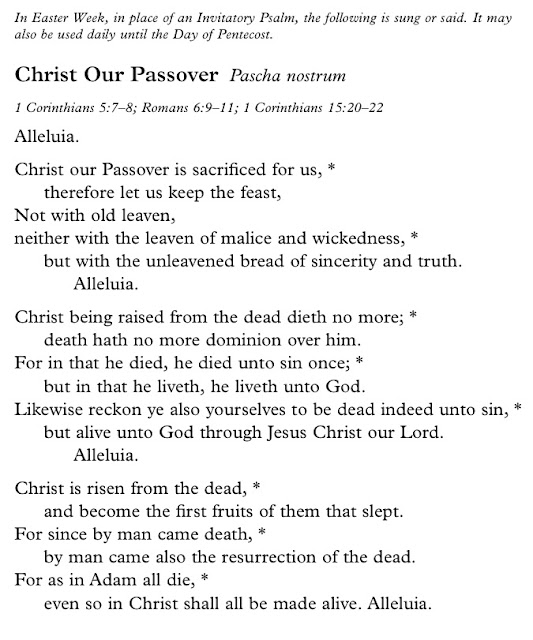 In his "Notes on the Canticles", the Rev. John Henry Blunt (his essay reprinted in the Saint Dunstan's Plainsong Psalter) writes:

The Anthems instead of "Venite exultemus" on Easter Day represent the primitive custom of Easter morning, when the versicle "The Lord is risen," and the response "He is risen indeed," were the formal salutation between Christians.  In the ancient rite of the English Church one of these anthems was said in procession before Mattins; and the service was retained in 1549.

In the Commentary on the American Prayer Book, the Rev. Marion J. Hatchett adds to this by writing:

The 1549 Prayer Book provided for the use of two "anthems" (Romans 6:9-11, two Alleluias, and 1 Corinthians 15:20-22 with one Alleluia) prior to Morning Prayer on Easter. A versicle and response and a collect followed. The structure of this preface, the first two verses of the first anthem, and a large part of the collect, derived from the order for the procession to the Easter sepulcher which had preceded the Sarum Mass for Easter Day.

A choral version of Pascha Nostrum from
the National Cathedral in Washington, D.C.

Posted by Steve Cavanaugh at 4:30 AM