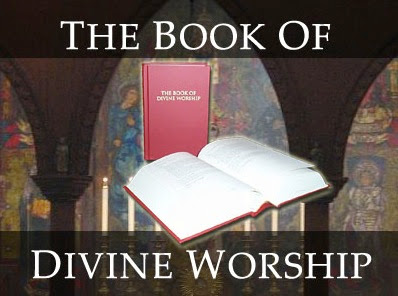 In remarks at the annual Conference of the Anglican Use Society on Friday, November 9th, Msgr. Jeffrey Steenson, Ordinary of the Personal Ordinariate of the Chair of St. Peter said that work was nearing completion on a revision of the Book of Divine Worship. Following guidance from the Congregation of Divine Worship in Rome, this revision will include only the Rite I services; congregations wishing to use contemporary language are directed to use the Roman Missal, third edition, in the translation released in 2011.

Commenting on the new version of the BDW, Msgr. Steenson said that this was not the final version of the liturgy being prepared by the Anglicane Traditiones interdicasterial commission, but an update with three purposes:

1) The correction of errors in the first printed edition of the BDW.

2) The updating of texts that taken from the Roman Missal, such as the Prayer over the gifts at the Offertory.

3) The restoration of certain prayers, such as the Prayer of Humble Access, to their original versions.

The new text is expected to be in the hands of parishes of the Ordinariate and the Pastoral Provision in time for Advent. Once made available, this version will be mandatory for use in all the parishes using the Anglican Use liturgy.

November 12, 2012 UPDATE: In the comments, you'll see I've clarified that this revision to the BDW is only to the liturgy of the Mass, and it is by way of corrections and bringing certain texts into conformity with the new translation of the Roman Missal. It will not at this time include the Daily Office or other services.

I've been informed by a member of the ad hoc committee that has worked on this that it will not, at this time, include the older text of the Prayer of Humble Access or other prayers; that is apparently being considered for the definitive liturgy that will be promulgated by the interdicasterial commission.
Posted by Steve Cavanaugh at 4:51 AM