Vatican, U.S. Officials to Headline Symposium on the Ordinariate 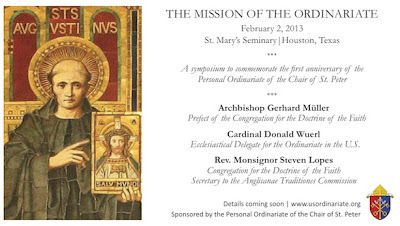 The symposium, which will be sponsored by the ordinariate, will be held Feb. 2, 2013 at St. Mary’s Seminary in Houston. Topics will include the ecclesiology of Anglicanorum Coetibus, and the evangelization and liturgical missions of the ordinariate.

Cardinal Daniel DiNardo, Archbishop of Galveston-Houston, will greet participants. Additional speakers include Bishop Kevin Vann of Orange (CA), who also is the ecclesiastical delegate for the Pastoral Provision; and Monsignor Jeffrey N. Steenson, ordinary of the Ordinariate of the Chair of St. Peter.

The Ordinariate of the Chair of St. Peter was established by Pope Benedict XVI on Jan. 1, 2012 for former Anglican groups and clergy seeking to become Catholic while retaining elements of the Anglican traditions and heritage. The ordinariate, which is based in Houston, Texas, is equivalent to a diocese, but national in scope. Its clergy and communities are located across the United States and Canada. Other ordinariates are located in the United Kingdom and Australia.

Details on the symposium will be posted online soon at www.usordinariate.org.

November 12, 2012 UPDATE: While not yet confirmed by the Ordinariate, word has reached me that it has been decided that the Symposium will be held at the Co-Cathedral of the Sacred Heart (rather than at the seminary) in Houston because of the anticipated large attendance.
Posted by Steve Cavanaugh at 4:59 AM