One of the new elements from the 1979 US Book of Common Prayer that found its way into the Book of Divine Worship is the Phos Hilaron, which is an optional hymn for the beginning of Evening Prayer.

The version given in the BDW is below.

Now as we come to the setting of the sun,
and our eyes behold the vesper light,
we sing thy praises, O God: Father, Son, and Holy Spirit.

Thou art worthy at all times to be praised by happy voices,
O Son of God, O Giver of life,
and to be glorified through all the worlds.

Unfortunately, of course, there is no music in the BDW, nor a reference to where the music for this translation of the hymn can be found. In chanting the office, I usually fell back on using the version found in the Liturgy of the Hours, sung to the tune "Jesu, dulcis memoria" (LM). But a few years ago I stumbled upon the web site of the Metropolitan Cantor's Institute of the Byzantine Catholic Eparchy of Pittsburgh (and doesn't it say something that there is a Cantor's Institute in an Eastern eparchy, i.e., diocese; you'd be hardpressed to find the equivalent in a Latin diocese). And there I found the archive of sheet music. The version of the Phos Hilaron below is from that archive. 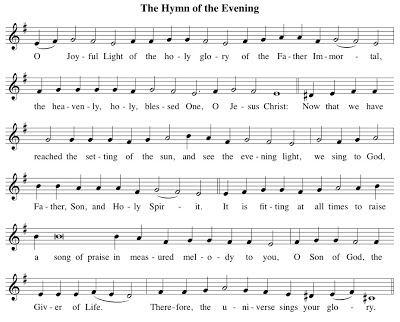 This version pairs well with the chants from St. Dunstan's Plainsong Psalter for chanted Evensong, I find. Here's hoping that the Ordinariate will also find its way to establish some equivalent to a Cantors (a Schola) Institute, for the preservation, teaching and handing on of the Anglican musical patrimony: its hymnody, the chant work of learned clergy such as Canon Douglas, and Anglican Chant.

Posted by Steve Cavanaugh at 4:23 AM