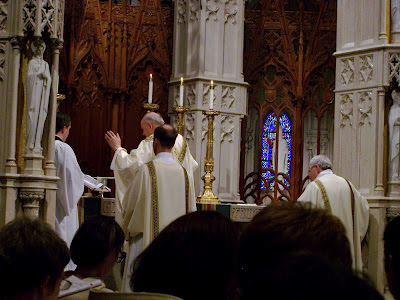 Msgr Jeffrey Steenson saying Mass at the Cathedral Basilica of the Sacred Heart in Newark, New Jersey,
with deacons Oliver Vietor and James Barnett on June 11, 2010. (Photo by Steve Cavanaugh)

London, England, Jun 6, 2012 / 01:59 am (CNA/EWTN News).- The Personal Ordinariate of Our Lady of Walsingham is preparing to publish its daily liturgical prayer book, as part of its mission to incorporate Anglican traditions within the Catholic Church.

Father James Bradley, communications officer for the jurisdiction, told CNA on June 5 that the “Customary of Our Lady of Walsingham,” which contains the order of daily prayer and readings, “shows a deep respect for the Anglican tradition, and gives it space to flourish” in the Catholic Church.

Announced in the ordinariate's “Portal” publication on June 1, the book is due out “in a month or two” according to Monsignor Andrew Burnham, Assistant to the Ordinary.

The new prayer book draws heavily from the 1662 Book of Common Prayer for its services of Morning and Evening Prayer. It also contains the traditional litany of intercession, along with the “minor hours” of the daily prayer cycle and the traditional night service of Compline.

In keeping with a decision of the Holy See, the text generally maintains the traditional language of Anglican worship – an older, more poetic English dialect that is widely regarded as both aesthetically rich, and spiritually valuable...

Read the rest of this story at the web site of the Catholic News Agency.

P.S. Previously we noted that the Customary of Our Lady of Walsingham is available for pre-order from amazon.co.uk. It is also available from the US site of Amazon.com.
Posted by Steve Cavanaugh at 2:58 PM