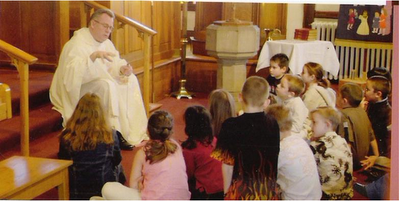 Fr. Affleck giving a talk to children at St. John's Episcopal
Church in Saugus, Mass. during his ministry there.

On Sunday, June 3, Deacon David Affleck was ordained to the priesthood by Bishop Richard Malone at the Cathedral of the Immaculate Conception in Portland, Maine. Fr. Affleck, 62, is originally from Long Beach, California and earned his Bachelor’s Degree in Business from California State University, Sacramento. He also attended the Church Divinity School of the Pacific, Berkeley where he received his Masters of Divinity in 1995. Affleck became an ordained minister in the Episcopal Church in 1995 and served Woodland, Folsom and Sacramento, California churches as well as St. John’s Episcopal Church in Saugus, Massachusetts.

In 2008, Affleck made his profession of faith to the Catholic Church and after taking a number of written and oral exams was considered for the diaconate and the priesthood under the Pastoral Provision.

Bishop Malone has appointed Fr Affleck as parochial vicar to the churches in Kittery/South Berwick/York.

During his years of ministry at the Episcopal parish of St. John's in Saugus, Mass, Fr. Affleck wrote a column called "The Pastor's Corner". Several of these columns are still available on the web site of the Saugus Advertiser, including "Valuing customs and conventions" a column he wrote for Christmas in 2005.

Portions of this story were gleaned from the web site of the St. John's Episcopal Church and the Diocese of Portland, Maine. Hat tip to Mary Ann Mueller for pointing out an earlier story on Fr. Affleck

Posted by Steve Cavanaugh at 7:05 PM