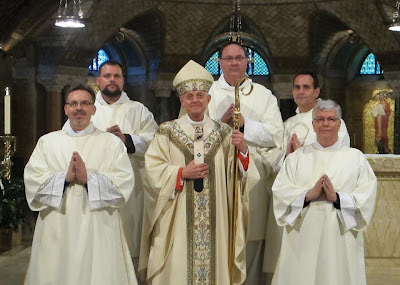 On Saturday, June 2, 2012 five deacons were ordained for the Ordinariate by Cardinal Donald Wuerl, Archbishop of Washington. The ordination was celebrated in the Crypt Chapel of the Basilica of the National Shrine of the Immaculate Conception. Pictured from left to right are: Deacons Richard Kramer, David Reamsnyder, Mark Lewis, Anthony Vidal, and Randolph Sly.

Photo and report from the Ordinariate on Facebook.
Posted by Steve Cavanaugh at 4:30 AM