Anglican Use Community Welcomed To New Home On All Souls Day

Father Ernie Davis, leader of Kansas City’s Our Lady of Hope Anglican Use Roman Catholic community, celebrates Mass on All Soul’s Day at the community’s new home, Our Lady of Sorrows Parish next to Crown Center. 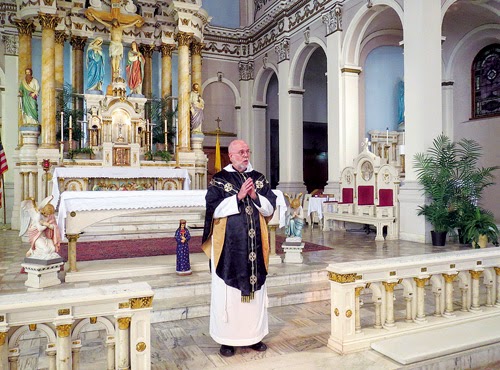 KANSAS CITY — It was a stunning question to open a homily, and one that had more than one answer.
“What in the world are we doing here?” Father Ernie Davis asked his congregation of Catholics who in 2008 came into full communion with Rome as one former Anglican community.
Yes, they were celebrating Mass for the first time in their new home, Our Lady of Sorrows Parish, adjacent to Crown Center.
Yes, though still small in number, they still dream big and of one day becoming a full parish in the Ordinariate of the Chair of St. Peter, an organizational structure established by Pope Emeritus Benedict XVI for united Catholics from the Anglican, Episcopalian and Methodist traditions to celebrate unity while retaining their adapted prayers and liturgy.
But what a day for all this to happen. All Souls’ Day. Anathema to the European and English Reformations of five centuries ago.
“Praying for the dead? Mass for the departed?” Father Davis told his congregation. “This was done away with 500 years ago. It was the first thing that was erased in the English Reformation. We would have been thrown in jail,” he said...

Read the rest at The Catholic Key.
Posted by Steve Cavanaugh at 6:31 AM