No definitive answers on the horizon 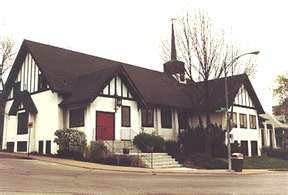 OMAHA, NEB: For 97 years, St. Barnabas Church has been a landmark at 40th and Davenport streets In Omaha, Nebraska. The bright white edifice, with brown roof matched by striking deep brown timber framing and sweeping stairs leading to classic Anglican red doors, has been home to an Episcopal - currently Anglican and soon-to-be Catholic - congregation. But as the church's centennial looms on the horizon, its ownership hangs in the balance.

As with so many other former Episcopal church buildings scattered around the United States, St. Barnabas - a fine example of English Herefordshire architecture - is mired in litigation with the Episcopal Diocese of Nebraska WHICH seems more than willing to take it away from the on-going congregation by any legal means possible.

Even though the current St. Barnabas church building is inching towards its centennial celebration, the congregation is even older.

St. Barnabas was conceived on the Feast of St. Barnabas (June 11) in 1868 as the Anglo-Catholic daughter of Trinity Parish, the Episcopal Mother Church in the Cornhusker State. According to church records, a small church was built on the corner of Ninth and Douglas streets. The first service was celebrated on Quinquagesima Sunday 1869 (Feb. 7). Finally, St. Barnabas Parish was birthed on May 3, 1869 with the enthusiastic consent of the first Bishop of Nebraska, the Rt. Rev. Robert Clarkson, when the parish constitution was formally adopted. St. Barnabas celebrated its first anniversary with the installation of its first rector, the Rev. George C. Betts, on St. Barnabas Day (June 11) 1869. Since Day One St. Barnabas has always be true to its Anglo-Catholic heritage born out of the 19th Century Oxford Movement. The church's website proclaims: "Faithful stewards of the Catholic Faith in the Anglican tradition since 1869."

For more than a century, St. Barnabas has maintained a strong witness to the Gospel and celebrated Episcopal services with an Anglo-Catholic flair. The faithful of the Omaha congregation, under the spiritual leadership of their priests, have built their faith upon the solid rock - Jesus Christ. Then the shifting sands of the ever-changing liberal theology of the now post-modern Episcopal Church made it abundantly clear that it was time to set out into the deep...

Read the whole story at Virtue Online
Posted by Steve Cavanaugh at 1:45 AM