Liturgy as provider of an ordered and bordered encounter with Scripture 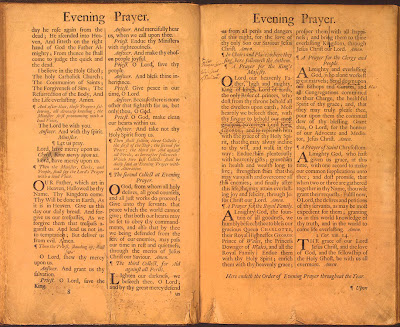 From the blog Haligweorc comes an interesting post on the Daily Office:

The two public rites of the church – the holy Eucharist and the daily office – have the same primary purpose: the worship and glorification of God. And that always has to be kept central. But the secondary purposes are different. The Eucharist is mystigogical and leads us into the heart of the mystery of Christ. The office is catechetical and instructs and forms us in the foundations of the faith. Now, you might be wondering… The dominant theme of our time together is the Anglo-Catholic social tradition. So why am I taking up time talking about the office? (Or, as I’ve heard some Episcopal clergy say, why are you spending your time talking about prayer when you should be talking about justice issues!) It’s because the Anglo-Catholic social conscience must be formed, it must be crafted, and the distinctive characteristic that differentiates a secular drive for a just society from one formed in the Catholic Anglican tradition is the process and method of its formation. The greatest tool that we have for molding a Christian social conscience is Scripture itself, and more particularly, the attentive practice of the daily office.

Alright, so what do I mean by ordered and bordered? ...

Read the whole presentation. It is a great essay on the importance of the Daily Office.
Posted by Steve Cavanaugh at 6:08 AM