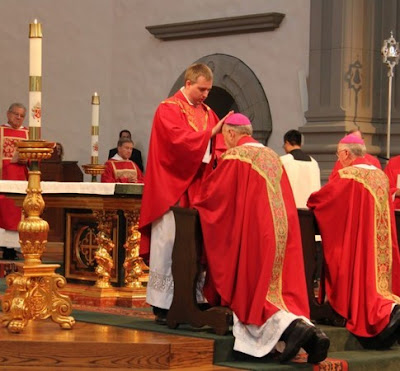 Fr. Bartus gives his first blessing to Ordinary Msgr. Jeffrey Steenson at the conclusion of the ordination Mass.
Nearly 500 years after the Church of England broke away from Roman Catholicism, a small group of Episcopalians returned to the fold Tuesday during a special Mass at Mission Basilica in San Juan Capistrano.

As part of a reunification program authorized by Pope Benedict, two Episcopal congregations and a married Anglican priest were welcomed into the Catholic faith during the service, which was led by Bishop Tod Brown.

In addition, Anglican priest Andrew Bartus was officially ordained as a Catholic priest Tuesday, even though he is married and has a child. Like others joining the Catholic Church across the nation, his congregation will maintain distinctive elements of Anglican practices.

All told, about 70 members of both congregations were confirmed as Catholics at the ceremony.

“What a joy it is for me to be a part of this holy work today," Msgr. Jeffrey N. Steenson told the crowd...

Read the rest of the story at Mission Viejo Patch.

Hat tip to Deborah Gyapong writing at The Anglo-Catholic, which also includes Msgr. Steenson's homily at the Mass. 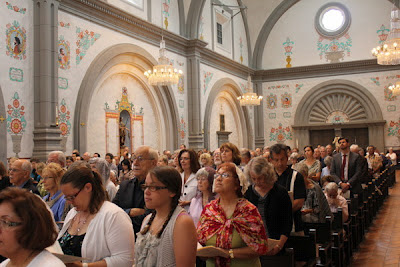 Posted by Steve Cavanaugh at 7:40 AM