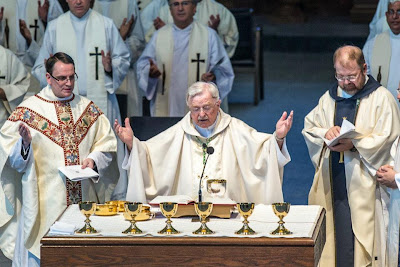 Fr. Lee Kenyon (left) and Fr. John Wright (right) concelebrate at the Mass of their ordination with Bishop Frederick Henry.
On Saturday 30th June an Englishman became one of the first former Anglicans in Canada to be ordained for service in the Personal Ordinariate of the Chair of St Peter. He was ordained by the Bishop of Calgary, the Most Revd Frederick Henry, at the request of the Ordinary, Monsignor Jeffrey Steenson.

Fr Lee Kenyon, who trained for the Anglican ministry at the College of the Resurrection, Mirfield, and served as a curate in the Anglican diocese of Blackburn, is part of the first ordination class for the Ordinariate in the US and Canada. He was ordained following a four month formation programme run from St Mary's Seminary in Houston, Texas.

Fr Kenyon was born and raised in Manchester, Lancashire. He is married to Elizabeth, and they have three children.

Fr Kenyon’s parish, St John the Evangelist, was the second oldest Anglican parish in Calgary, founded in 1905 as a parish of the Church of England in Canada (from 1955 the Anglican Church of Canada), until being received, en masse, into the Catholic Church in December 2011. The parish community remains at its historic property through a lease/purchase agreement with the Anglican Diocese of Calgary.

Hat tip to Br. Charles Gilman, OSB.
Posted by Steve Cavanaugh at 11:17 AM