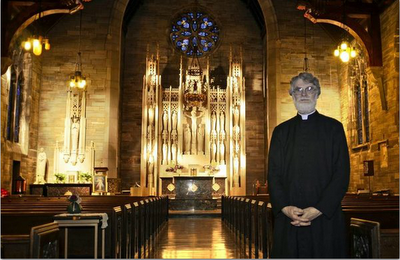 Rev David Ousley at Holy Cross Church where
he was ordained on June 16, 2012

The Rev. David Ousley was baptized a Methodist in 1951, was ordained a priest of the Episcopal Church in 1979, and left it in 1999 for the Anglican Church in America.

And on Saturday, this 61-year-old married father of three will make one more ecclesiastical leap: he will be ordained a priest of the Roman Catholic Church in a 11 a.m. Mass at Holy Cross Church in Mount Airy.

He is "swimming the Tiber," as Anglicans call conversion to Catholicism — a reference to the river that runs through Rome — but the white-bearded Ousley will not emerge from his swim on some strange and foreign shore.

Even after he becomes a Catholic priest, he can continue to wear his Anglican collar, lead his flock at Vesper services, warble old hymns like "A Mighty Fortress," and read some of the prayers found in the lectionary that the Church of England has been using since King Henry VIII broke with Rome in the 16th century .

After decades of petitioning and negotiating by conservative Anglicans and Episcopalians, Pope Benedict XVI in 2009 approved a constitution, called Anglicanorum Coetibus, establishing the equivalent of national dioceses for disaffected Anglicans such as Ousley. These ordinariates, as they are called, allow laity and clergy from the Anglican tradition to join the Roman Catholic Church while retaining much of their liturgies, calendar, and traditions — including married priests.

The ordinariate for Britain was created last year, for the United States and Canada in January, and for Australia on Friday. About 60 Anglican priests and 2,000 laypeople are expected to join the North American ordinariate, headed by the Rev. Jeffrey Steenson, a former rector of the Episcopal Church of the Good Shepherd in Rosemont and a longtime friend of Ousley and his wife, Beth...

Read the full story with much of Fr. Ousley's biography on the web site of the Philadelphia Inquirer.
Posted by Steve Cavanaugh at 2:47 PM