Another entry from Mr. Uher, and my commentary.


Everyone says they love the Coverdale Psalter, the grace of its language, its majestic tone. Most people have never used Coverdale's Psalter exactly as he wrote it, but rather we have worshipped with it via various recensions and twigglings over the years.

The American recension of 1928 is to my mind one of the very best. It does have single problems with the elimination of the word "Satan". A closer reading of the Vulgate and Septuaginta also has suggested worthy corrections.

Currently, the best version I have encountered is in The St. Dunstan's Plainsong Psalter published by Lancelot Andrewes Press -- a press of the Western Rite Orthodox who are also of the Anglican Patrimony, my friends. Frankly, I recommend the adoption of this Plainsong Psalter as it is. It is a wise revised edition of Canon Douglas' great Plainsong Psalter. It includes Sarum tones and other ancient British tones. Its version of the Coverdale Psalter restores some things got wrong in the American 1928 recension, and it makes other slight alterations that make the text sing doubly in the mouth of a worshipper.

This press, Lancelot Andrewes Press, is one of the reasons to cheer among the Anglican diaspora. They have brought Dr. Neale's commentary on the psalter back into print. Deo gratias! They have published a gorgeous Western Orthodox edition of The Book of Common Prayer. They have made Lancelot Andrewes great prayers available in a beautiful edition. And the version of the Rule of St. Benedict in Latin and English sold by them is the one I use...

Read the rest of Mr. Uher's post at Tonus Peregrinus

I want to second Mr. Uher's recommendation of the St. Dunstan Plainsong Psalter. I have been using this for my personal singing of the office for about 2 years now, and included it for illustration in my lectures on Gregorian and Anglican chant at the summer sessions at Thomas More College in 2010 and 2011. I have a hard cover version, but there is also a soft cover version (not a paperback) now available as well. The notes are also quite valuable.

In a future Office Book for the Ordinariates, it would be good if this noted psalter could be included.

In addition to the Coverdale Psalter, the SDPP also has several settings of the Benedictus, Te Deum, Magnificat, Nunc Dimmittis and other canticles appointed in the Prayer Book that can be used to good effect in a sung Office. See below for an example. 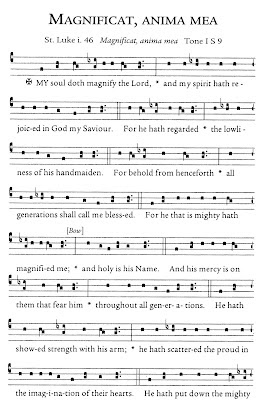 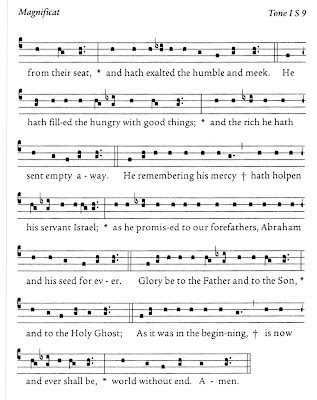 Posted by Steve Cavanaugh at 5:06 PM