Mgr Andrew Burnham: The Customary of Our Lady of Walsingham 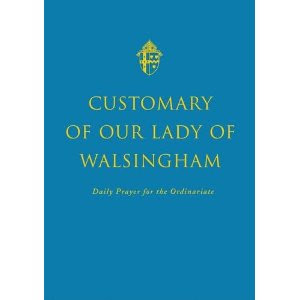 Mgr Andrew Burnham, Assistant to the Ordinary, writes in this month's Portal:
The Customary of Our Lady of Walsingham is to be published very soon now by Canterbury Press. In a month or two we shall have access to this very handsome publication. It will contain the Ordinariate’s own form of Morning and Evening Prayer, drawn from the Book of Common Prayer, together with the Litany, minor offices for use during the day, and a traditional order for Compline.
The Coverdale Psalter will be included, as will lectionary tables which closely follow the not as yet well-known, but superb, two-year sequence of Scripture readings devised for the daily Office of the Roman Breviary. There will also be the Ordinariate Calendar and, most notably, a rich anthology of post-biblical readings drawn from the riches of the British spiritual tradition. This anthology complements the Roman Divine Office as well as the Ordinariate Office, for it will be possible to use many of the post-biblical readings for the Office of Readings.

Evensong and Benediction
Some will find themselves using the different Office books for different purposes – one for individual prayer and devotion, the other for public worship. Those who want to use the Roman Office books in the morning and the Customary in the evening – or the other way round – will be able to do so without too much difficulty. The particular value of the Customary is that it makes available one of the acknowledged treasures of the Anglican tradition – the public celebration of the Office, and in particular of Evensong. The reform of the Roman Office following the Second Vatican Council sought the development of the public celebration of the Office and, truth to tell, that is a reform yet to be realised. In these early days of the Ordinariates, there have been already many celebrations of Evensong and Benediction and it is intriguing to know not only that this has been in accordance with the Holy Father, Pope Benedict’s wish, but also that it has been his great pleasure, that this should have been so.

Traditional language
It is hoped that the Customary will be ecumenically helpful too. There has been a deliberate decision by the Holy See that the Ordinariate’s distinct Use should be predominantly in traditional language. This is not to criticise in any way the modern language translations and compositions of recent Anglican revisions. Rather it is a recognition of the value of the sacral language of the Prayer Book. Members of the Ordinariates in North America and Australia are great devotees of Prayer Book English. Moreover, the 400th anniversary of the 1611 Authorised Version of the Bible (AV) – and the immense popularity still of cathedral Evensong – shows that the British public too are aware of the beauty and importance of a traditional sacred dialect. It is that dialect which the Customary and the Revised Standard Version (RSV) of the Bible preserve and make available.

‘Common Bible’
Why the RSV and not the King James Bible? The answer lies in the subtle development of the English Bible tradition. For accuracy’s sake, twentieth century students began to rely on the Revised Version of 1881-1894. Meanwhile the Revised Standard Version of 1946-1957 was becoming established and, in 1966, was accepted by Catholics and Protestants as a ‘Common Bible’. It was the first truly ecumenical Bible and brought together the two traditions – the Catholic Douay-Rheims Bible and the Protestant Authorised Version. Thus, whenever the Customary quotes extensively from the Bible, it is the RSV that it uses. The Catholic Church in the 1970s in Britain opted (mistakenly as it now seems) for the ‘dynamic equivalent’ Jerusalem Bible translation. That version greatly helped public understanding of the Scriptures, but, like the Mass translation of the same period, was based on a theory of translation that is of great value in paraphrasing and communicating the meaning of, for example, modern literature written in other languages, but no longer thought appropriate for representing sacred texts written in ancient languages.
Our prayer is that the Customary will be a treasury not only for the Ordinariates but for the whole English-speaking world.
__
The Customary of Our Lady of Walsingham is available to 'pre-order' from Amazon.co.uk here.
Posted by Steve Cavanaugh at 11:37 AM