Ordination to the diaconate for six Ordinariate clerics

Fr. Scott Hurd, Vicar General of the Ordinariate of the Chair of St. Peter, writes on Facebook:


I thank God for the last night's ordination as transitional deacon of six oustanding men in Fort Worth. As a former priest of the Episcopal Diocese of Fort Worth, I give thanks in a particular way for my friends and former colleagues. Of them, Deacon Chuck Hough Sr. was my first boss at St. Andrews', Grand Prairie, and his son was an altar server at Stephanie's and my wedding. And I had great joy assisting Deacon Christopher Stainbrook Stainbrook leading the diocesan youth ministry- which included a fine young woman named Kristina Steenson! And thanks you, Bishop Kevin Vann. 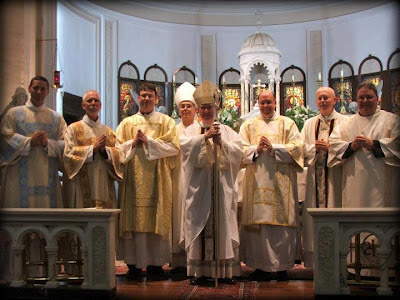 See also the story on the Anglo-Catholic blog.

Posted by Steve Cavanaugh at 9:34 AM