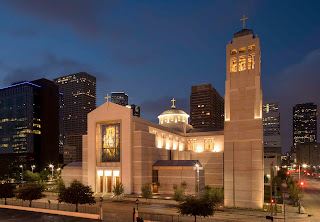 Cardinals Donald Wuerl and Daniel DiNardo and ten other bishops from across the nation will join Rev. Jeffrey N. Steenson for an historic Mass of Institution for the Ordinariate of the Chair of Saint Peter (www.usordinariate.org):

The ordinariate, similar to a Catholic diocese, but national in scope, was established by the Vatican on Jan. 1, 2012 to serve former Anglican groups and clergy who become Catholic while retaining elements of their Anglican traditions and heritage.

During the Mass Fr. Steenson, a professor and former Episcopal bishop, will be installed as the first Ordinary and given the title of Monsignor. Cardinal Wuerl, delegate for the implementation of Anglicanorum coetibus, the document authorizing ordinariates, will read the Vatican’s official letter of appointment and present Msgr. Steenson with symbols of his office: a crozier (pastoral staff representing his role as a spiritual shepherd) and miter (tall hat worn during liturgies representing his authority).

Msgr. Steenson will be greeted by representatives of the ordinariate, including young people, candidates for the priesthood and pastors of existing Anglican-use parishes (under a previous provision, a small number of Anglican parishes became Catholic as part of regular Catholic dioceses).

As ordinary, he will have responsibility for establishing the new organization, including parishes, community and clergy. Since he is married, he will not be a bishop, but will be a full member of the United States Conference of Catholic Bishops.

He joined the Catholic Church in 2007 and was ordained a Catholic priest in 2009. He and his wife, Debra, have three adult children. He also is on the faculty of St. Thomas University in Houston.

To date, over 100 former Anglican priests have applied to become Catholic priests through the ordinariate; some 50 are beginning studies in a formation program, with some ordinations possible in June. Another 1,400 individuals from 22 communities also are seeking to enter the ordinariate. Since September, two former Anglican parish communities in Maryland and a group in Fort Worth, Texas have been received into the Catholic Church.

The Ordinariate of the Chair of Saint Peter is based in Houston, Texas. Its main church is Our Lady of Walsingham. Only one other ordinariate exists, in England.

The ordinariates are the result of requests from Anglican groups to become Catholic in a “corporate” manner (as groups). In November 2009, Pope Benedict XVI issued an apostolic constitution, Anglicanorum coetibus (Anglicanorum chay-tee-bus), which authorized the ordinariates. In September 2010, the Vatican appointed Cardinal Donald Wuerl, Archbishop of Washington, as its delegate for its implementation in the United States. He, Bishop Kevin Vann of Fort Worth and Bishop Robert McManus of Worcester were assisted by Reverend Scott Hurd, a priest of the Archdiocese of Washington (and a former Anglican priest). Fr. Hurd is serving a three-year term as vicar general of the ordinariate.
Posted by Steve Cavanaugh at 1:41 AM