Bringing ex-Anglicans into the Catholic fold 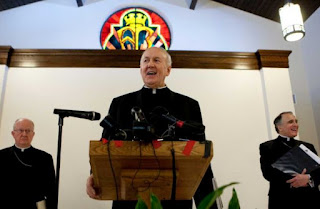 The Rev. Jeffrey Steenson's colleagues joke that during the past several years, he's gone from a church heretic to a hierarch.

Even though he has been a Catholic priest for only about three years, Steenson was Pope Benedict's pick to lead a brand-new structure for Catholic converts from Anglican churches, a position he officially takes on this weekend in Houston.

Catholic bishops and leaders from across the country will fill downtown's Co-Cathedral of the Sacred Heart at 3 p.m. Sunday for his installation as the head of the Personal Ordinariate of the Chair of St. Peter.

The ordinariate consists of Catholic parishes that maintain some traditional Anglican prayers and music in services. Like most of the members of these communities, called Anglican Use parishes, Steenson used to be an Episcopalian, an Episcopal bishop, in fact.

He converted to Catholicism in 2007, after spending most of his career studying the church fathers, striving for ecumenicalism and, ultimately, feeling God put on his conscience that the Catholic Church was the "one, true, holy and apostolic" body.

A married father of three and amateur pilot, Steenson joined the church under provisions initially made for former Anglicans in the early '80s by Pope John Paul II. About that time, the first Anglican Use parishes formed in the U.S., including Our Lady of the Atonement in San Antonio and Our Lady of Walsingham in Houston, now the headquarters for Steenson's ordinariate.

The announcement came as a surprise to Steenson and members of the local parish, which years ago "had been meeting in borrowed chapels and rented warehouses. We wouldn't have imagined it would have come to this and that Houston would be the headquarters for this nationwide (ordinariate)," said Clint Brand, a parishioner at Our Lady of Walsingham and professor at theUniversity of St. Thomas. "It's a recognition of what converts have carried with them into the Catholic Church. We can now reclaim the tradition that taught us to be Catholic."

Catholics hope their Episcopal neighbors see the initiative positively, as an unprecedented way of honoring the Anglican tradition and its core liturgy, in the Book of Common Prayer, by officially making a place for it in the Catholic Church...

Read the rest of the article in The Houston Chronicle.

Posted by Steve Cavanaugh at 7:03 AM