January Gathering News-Anglican Use Society of St. Bede the Venerable

Over the weekend of January 1-2, the Anglican Use Society of St. Bede the Venerable (SSBV) had its second meeting. A severe winter storm—severe even by the rather high standards of Minnesota—put a bit of a damper on attendance. Only five were present for Evensong on Saturday night, but 15 managed to make it for Mass on Sunday afternoon in the Abbey’s St. Francis Chapel. The congregation was a mix of Anglicans who have already entered the Catholic Church and of local Catholics showing their support...
Read the rest at the web site of the AUS of St. Bede the Venerable. 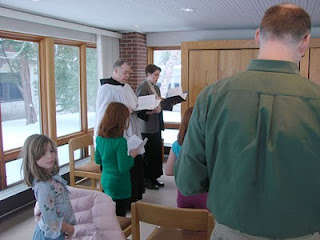 Br. John-Bede Pauley, O.S.B. and his sister, Susan Schleper, form the schola
as nieces Olivia and Clara look on.
Hat tip to the blog The Anglo-Catholic
Posted by Steve Cavanaugh at 4:19 AM

Email ThisBlogThis!Share to TwitterShare to FacebookShare to Pinterest
Labels: Anglican Use Society, Book of Divine Worship