This week two posts about themes that should be of interest to those whose hearts and minds are occupied by all things Anglican Use were posted on the New Liturgical Movement blog.

Toward the end of the week we were treated to a post on Fr. Frederick William Faber:

Fr. Anthony Symondson, SJ, delivered this outstanding tribute to Frederick William Faber, English hymnwriter ("Faith of Our Fathers") and founder of the London Oratory, on the occasion of the 150th anniversary of his death in 1863.

FR FREDERICK FABER
The death of Fr Frederick William Faber of Bright’s Disease at the age of forty-nine on the morning of 26 September 1863, just after seven, after a long and painful illness was met by an outpouring of grief that affected the greater part of London and extended to distant parts of the country. His funeral in the newly-built Oratory Church attracted a great crowd of rich and poor of whom the second were in the ascendant; the poor loved him and he loved them...

Go read the whole post for more on this important convert from the Church of England during Tractarian times.

The week started, however, with a post on the revised Ordinariate liturgy for Mass (many of the comments, unfortunately, shedding more heat than light!), which has been enjoying a "trial run" in a handful of parishes, including the principal church of the US Ordinariate in Houston, and which is due to be rolled out to all parishes in North America on Advent Sunday, following an introduction to all the clergy at a retreat in Florida in late October.


Introducing the Ordinariate Use


From the Friends of the Ordinariate of Our Lady of Walsingham: 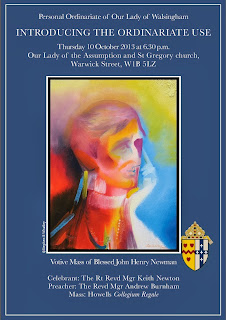 History will be made in the Catholic Church on Thursday 10 October when a new text for the Mass which includes traditional Anglican words is officially introduced in London.

The new text has been devised for use by Ordinariates throughout the English-speaking world as a way of putting into practice Pope Benedict XVI’s vision of allowing former Anglicans who wish to enter the full communion of the Catholic Church to do so whilst retaining aspects of their spiritual and liturgical traditions. Benedict XVI described these as “precious gifts” and “treasures to be shared”.

The new liturgy — the work of a special commission established by Rome and now approved by the Holy See — includes material from the Anglican Book of Common Prayer (1662) as well as the Roman Rite. It will be unveiled with a Mass followed by a media launch at the Church of Our Lady of the Assumption and St Gregory, Warwick Street, Soho...
Read the whole post and comments at NLM.
Posted by Steve Cavanaugh at 6:01 AM