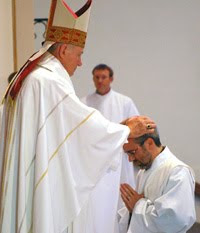 Anne Marie Cox reported on July 8th on the diocesan blog of the Diocese of Des Moines, Iowa:

Bishop Richard Pates ordained Father Chori Seraiah on Sunday, July 8, to the priesthood for the Personal Ordinariate of the Chair of St. Peter, which is the equivalent of a diocese. The ordinariate was created on Jan. 1 and is composed of parishes, groups, religious communities and invidiuals of the Anglican heritage. The members of the ordinariate include "those faithful, of every category or state of life, who, originally have belonged to the Anglican Communion, are now in full communion with the Catholic Church, or who have received the sacraments of intitiation within the jurisdiction of the ordinariate itself, or who are received into it because they are part of a family belonging to the ordinariate" (Decree of Establishment, 1). Joning the new pilgrims may also be the clergy and people of the Anglican use parishes, who have been the pioneers in the noble work of living out the Anglican heritage within the Catholic Church.

Congratulations to Fr. Seraiah and many blessings on him and his family as he undertakes his mission in Iowa!
Posted by Steve Cavanaugh at 3:50 AM