Homily by Cardinal Wuerl at Ordination Mass of June 23, 2012

The Personal Ordinariate of the Chair of St. Peter has posted the homily given by Archbishop Donald Cardinal Wuerl at the Saturday ordination of Frs. Mark Lewis, Ed Meeks and Rick Kramer. Of note in the Cardinal's homily is the following: 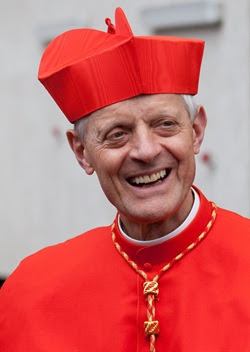 Reunion between Anglicans and Roman Catholics has been the goal of ecumenical dialogues which were inaugurated in 1966 by Pope Paul VI and Archbishop of Canterbury Michael Ramsey. Today we see the first fruits of these efforts with this ordination.

Today our celebration is a visible sign of the communion of faith spread throughout the whole world and how it is anchored in Rome, where Peter lives now, bearing the name Benedict XVI.

But there is a wider cultural context for your ministry today. You are priests of the New Evangelization. All around you are those for whom the Gospel has lost its savor. Your ministry will be to those who were too often taught that their Catholic faith and its life-giving message is an option. To them you are sent today. As Jesus commissions you: “You will be my witnesses.”

You are the priests who will re-propose Christ as the answer to a world staggering under the weight of so many unanswered questions of the heart. There is even more in answer to the question, “Where do you exercise your ministry?” We are called to be priests in the circumstances of our day with all of its challenges.

In his January 19, 2012 talk to the bishops of Region IV, our Holy Father, Pope Benedict XVI, spoke of another challenge – one connected with and flowing out of the need for a New Evangelization – the call to defend religious freedom.

In that talk I was privileged to hear in person and which I gave to each priest, deacon and seminarian at the Chrism Mass, our Holy Father taught us:


“Of particular concern are certain attempts being made to limit that most cherished of American freedoms, the freedom of religion...the seriousness of these threats needs to be clearly appreciated at every level of ecclesial life.”

You are being ordained for a Church whose roots go centuries back into the past, whose ministry is exercised in the present and who continually looks forward to the future and the realization of the kingdom. Neither nostalgia for past moments, nor anticipation of future glory should distract us from the reality of the now.
Accept for yourself Saint Paul’s advice to Timothy whom he ordained and sent to serve, “Do not neglect the gift you have, which was conferred on you through the prophetic word and with the imposition of hands...” Always rejoice in the gift of grace you have just received and let your gladness and joy be apparent and generous.

Read the whole homily at the site of the US Ordinariate.
Posted by Steve Cavanaugh at 6:52 PM