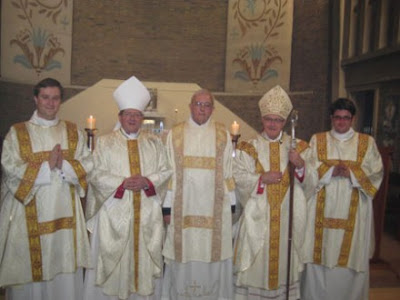 A former Anglican bishop has been ordained a deacon for the ordinariate.

Robert Mercer, who was received into the Catholic Church in January, was ordained by Auxiliary Bishop Alan Hopes of Westminster at Allen Hall seminary in London. He will be ordained a priest on Monday.

He is one of three former Anglican clergy to be ordained priests for the ordinariate. More than 200 former Anglicans are also expecting to be received into the Catholic Church in Holy Week.

Mgr Keith Newton, Ordinary of the Personal Ordinariate of Our Lady of Walsingham, presented Robert Mercer for ordination. Other members of the Ordinariate, together with staff and seminarians from Allen Hall, were present for the celebration.

During his homily, Bishop Hopes said: “Robert, your life has been one of profound commitment and witness. Your formation and ministry within the Anglican tradition have provided you with a solid spiritual bedrock on which your life has been built … You have been a bold witness to Christ and to the truths of Catholic Christianity – often at great cost to yourself”.

Mgr Newton, speaking after the ordination, said: “It is a great joy to be here today to celebrate Robert’s ordination. We hope and pray that it will be an encouragement to members of the Traditional Anglican Communion – an assurance of the respect and warmth of welcome, which the Ordinariate offers to them and to all Anglicans who are faithful to the vision of Christian Unity”.

Mr Mercer will be ordained to the Sacred Priesthood on March 26 in Portsmouth Cathedral.

from the Catholic Herald.