By Mary Ann Mueller in Houston 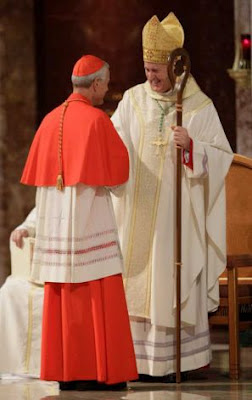 An excited crowd was already starting to form at Sacred Heart Co-cathedral before Sunday's early afternoon Vietnamese Mass was even completed. People were gathering from points near and far to witness and participate in a unique moment in Catholic ecclesial history - the formal installation of the first Ordinary of the Anglican Ordinariate in the United States.

Pope Benedict XVI's much-anticipated Apostolic Constitution Anglicanorum Coetibus was finally becoming a reality in America. All the prayers that have gone into this moment were about to be fulfilled and brought to full fruition. In moments, the written words would be spoken. Leaping off the page, these words would become a reality and the Rev. Jeffrey Steenson would be officially installed as the reigning cleric with jurisdiction.

The occasional light whiff of incense that drifted past the nostrils of the multitude, as they found their seats in the massive 27,800 square foot cathedral, was the first hint that something special was about to happen.

From somewhere in the back of the immense cathedral, an organ started to play softly helping to create a contemplative atmosphere. Pews were filling up as the finishing touches were being put on the solemn ceremony that would begin momentarily.

As quickly as the organ had started to play, the lilting musical notes ended. A deep hush descended on the assembled congregation. The strong aroma of incense filled the church. The Opus XIX 5,499 pipe organ pealed out the first notes of "Firmly I Believe", bringing the congregation to its feet. Blessed John Henry Cardinal Newman penned the 19th Century hymn with the 20th Century melody being written by Joseph Kucharski, the professor of church music at Nashotah House. The entrance procession had begun.

First to process in were the Catholic bishops and archbishops -- eight in all - who were dressed in their fuchsia-colored choir dress. The next splash of color came when the two cardinals came in attired in brilliant vivid red.

The processional cross was flanked by two torch bearers, followed by the thurifer who with a practiced swing could twirl the thurible a full 360 degrees sending great clouds of aromatic blue-gray white smoke drifting towards the 72-foot-high vaulted ceiling.

Emerging from the smoke screen of incense came eight torch bearers leading the way for those who were carrying the humeral-veil draped crosier and miter - which would become Fr. Steenson's symbols of spiritual authority and temporal power in the recently created personal Ordinariate of the Chair of Saint Peter.

The new Anglican ordinariate was erected on New Year's Day by the Congregation for the Doctrine of the Faith at the behest of Pope Benedict XVI. This came in response to the many Anglicans who, for years and even decades, have pounded on the Vatican's door seeking to be reunified with the Church of Rome following the original splintering off of Anglicanism in the 16th Century. The Pope made a special provision for Anglicans to become fully Roman Catholic while maintaining some of their unique cherished ways in patrimony and ethos...

Read the rest of the story on Virtue Online.
Posted by Steve Cavanaugh at 10:17 AM