Anglicans on the Move

07/05/2011
by CHARLOTTE HAYS
One of the first American parishes to respond to Pope’s offer will mark a special feast day this October. 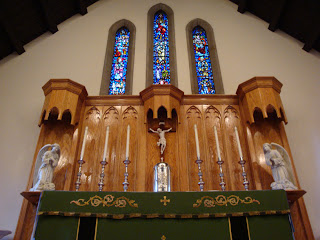 BLADENSBURG, Md. — “As we began to think about certain matters, our hearts began to melt, and we moved towards Rome,” said Father Mark Lewis, rector of a church that was formerly St. Luke’s Episcopal Church in Bladensburg, Md.
St. Luke’s has made headlines as the first Episcopal church in the Washington, D.C., area and the second in the state of Maryland to avail itself of Pope Benedict XVI’s offer to Anglicans. That offer was outlined in Anglicanorum Coetibus, an apostolic constitution that makes it possible for groups of Anglican congregations to enter the Catholic Church
For the St. Luke community, that will happen on Oct. 9, when Cardinal Donald Wuerl, Archbishop of Washington will receive them into the Catholic Church.”
The Vatican Congregation for the Doctrine of the Faith last fall put Cardinal Wuerl in charge of coordinating the entry of Episcopal parishes into the Church...


Read the rest in The National Catholic Register

Hat tip to Mary Ann Mueller.
Posted by Steve Cavanaugh at 5:03 AM