Keep the Mass in Christmas 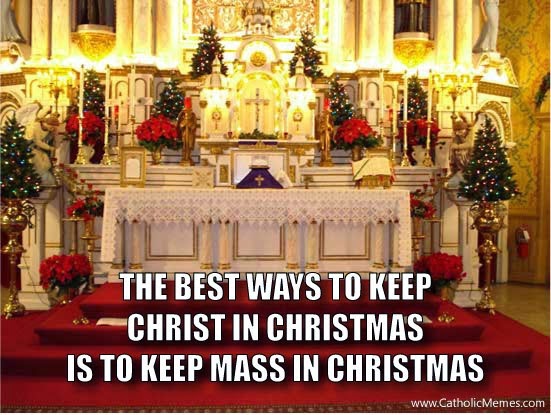 "Whereas we not only use it as a nourishment spiritual, as that it is too, but as a mean also to renew as ‘covenant’ with God by virtue of that ‘sacrifice’ as the Psalmist speaketh."

Lancelot Andrews, a bishop in the regin of James I and VI, and the head of the team charged with the translation of the Scriptures into English now known as the Authorized Version or King James Version, was insistent that in the Lord's Supper we are not only nourished by a spiritual meal, but renew the covenant with God through the one Sacrifice of Christ.

And this is only fitting. In the seventh chapter of Leviticus we read "For the wave breast and the heave shoulder have I taken of the children of Israel from off the sacrifices of their peace offerings, and have given them unto Aaron the priest and unto his sons by a statute for ever from among the children of Israel;" and in many other places of the Old Testament it is clear that only the priests could eat of the sacrifices of the Tabernacle and Temple. Jesus confirms this in his dispute with the Pharisees when, in chapter 6 of Luke he asks them "Have you not read what David did when he was hungry, he and those who were with him: how he entered the house of God, and took and ate the bread of the Presence, which it is not lawful for any but the priests to eat, and also gave it to those with him?"

But we are assured in the first epistle of St. Peter that all of us who are baptized are "living stones...built into a spiritual house, to be a holy priesthood, to offer spiritual sacrifices acceptable to God through Jesus Christ." And our priesthood is seen, not in that we each offer the sacrifice, for even in the time of the Temple every priest did not offer the sacrifice, as only one at a time could do so, (and hence Zechariah was chosen by lot from among his section of the priesthood to offer the incense on the day he encounted the Archangel), but in that we eat of the Sacrifice.

The best way to keep Christ in Christmas, as others have noted, is to keep the Mass in Christmas. May all of our readers be blessed in the days to come when we remember the tender love of our Savior who came to dwell in humble surroundings that we might share in his glory.

Read, mark, learn and inwardly digest the wise words from the Anglican Patrimony in Bishop Andrewes' text from our Pentecost 2010 (Vol III, No. 2) issue: http://www.anglicanuse.org/AE_3_02_AngPatr-Andrewes_Sacrifice.pdf Posted by Steve Cavanaugh at 6:14 AM