Father Shier joins Ordinariate of the Chair of St. Peter set up by Pope Benedict
By Agnieszka Krawczynski 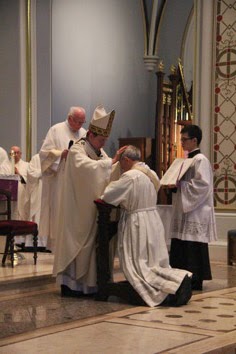 The fruits of Pope Benedict's efforts to welcome Anglicans to the Catholic faith were manifest at Holy Rosary Cathedral as Deacon Michael Shier was ordained a priest for the Ordinariate of the Chair of St. Peter.

"It's amazing that the ordinariate has actually happened," Father Shier said after his ordination March 15.

The Rev. Shier, a pastor for the Anglican Catholic Church of Canada, and 11 members of his former parish converted to Catholicism in June 2012.

"It started when Anglicanorum Coetibus was given by Pope Benedict," explained Barbara Shier, his wife.

The apostolic constitution, written in 2009, describes the possibility of creating ordinariates, which function like dioceses, for Anglicans to enter the Catholic Church while keeping some liturgical and spiritual traditions.

"He invited us to make the transition and to bring the best of Anglicanism with us," Father Shier explained. "We sent our prayer books and missals to Rome and received back a liturgy that surpasses all our hopes and dreams."

The Ordinariate of the Chair of St. Peter, created in January 2012, spans all of North America. Its ordinary, or head, is Msgr. Jeffrey Steenson, who arrived from Texas and concelebrated along with about 20 other priests of the ordinariate or the Vancouver diocese.

"It is our brothers and sisters in the whole Catholic Church who have strengthened us and given us a joy in our lives. We are so pleased and so happy to be with you in full communion," he said.

Archbishop J. Michael Miller, CSB, celebrated the ordination Mass. "(The priesthood) is both a gift and a mystery," he pointed out in his homily...

Father Bruce McAllister, archdiocesan chancellor, prepared the congregation of converts to join the Catholic Church through a series of retreats while Msgr. Steenson trained their pastor.

"He is a man of deep prayer. You'll often see him at prayer in church prior to the liturgy. And I know that he prays for many people, including those who are his former parishioners who have not come into full communion" with the Catholic Church.

Father Shier and his congregation will use the chapel at St. Patrick's Parish in Maple Ridge.

Read the rest at The B.C. Catholic