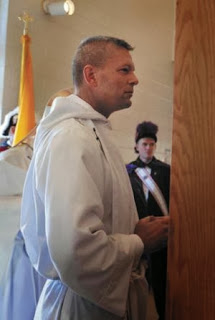 Father Jerry Sherbourne, an active-duty U.S. Army Chaplain, and former Anglican priest, was ordained a Catholic priest Sunday at the Basilica of the National Shrine of the Immaculate Conception. Through the invocation of the Holy Spirit and the imposition of hands, His Excellency, the Most Reverend Timothy P. Broglio, J.C.D.,  ordained him during a 10:00 a.m. Mass.
Father Sherbourne becomes a Catholic priest, incardinated in the Personal Ordinariate of the Chair of St. Peter, a special Church jurisdiction established by Pope Benedict XVI for those of the Anglican heritage entering full communion with the Catholic Church while maintaining distinctive elements of their theological, spiritual, and liturgical patrimony.
In preparation for his transition from Anglican to Catholic, Father Sherbourne underwent a two-year formation program approved by the Congregation for the Doctrine of the Faith of the Holy See, a process that included his ordination as a transitional Catholic deacon. A married father of six, he also received a dispensation from Pope Francis to be a priest without embracing celibacy. Father Sherbourne and his wife Heather live with their family in north Alabama where he currently serves as deputy Garrison chaplain at Redstone Arsenal....
Read the rest at Deacon Greg Kandra's The Deacon's Bench.
Hat tip to Mary Ann Mueller.
Posted by Steve Cavanaugh at 2:44 AM