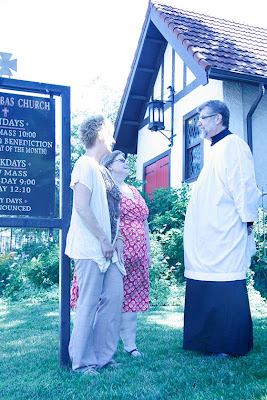 Father Robert Scheiblhofer, parochial administrator of St. Barnabas Church in Omaha, said he felt joy as he watched church members being confirmed during a historic July 10 ceremony welcoming the former Episcopalian church into the Catholic faith.

At that time, Father Scheiblhofer had resigned his Anglican orders to become Catholic. He was ordained a priest Aug. 10 by Archbishop George J. Lucas at St. Cecilia Cathedral in Omaha.

Prayer and faith sustained the church of about 50 people during its long journey, which dates back to St. Barnabas' founding in 1869 as part of a movement reestablishing Anglicanism's Catholic roots, said Father Scheiblhofer, 62.

"We've been working and praying for this for many years," he said. "It's literally the answer to that prayer."

Becoming part of the Catholic community was the highlight of the ceremony for Vicki Bohn, 69, a member of St. Barnabas for 12 years with her husband, Mel, 70...

Read the full story about the reception of St. Baranabas on Catholic Voice Online.

Read the related story on St. Baranbas' long history of ecumenism, which begins:

St. Barnabas has long history of ecumenism
By DAVID GOUGER

St. Barnabas Church in Omaha - an Anglican congregation that came into full communion with the Catholic Church during a Rite of Reception ceremony July 10 - has a history of Anglican-Catholic ecumenism dating to its 19th century ties with Father Paul Wattson, whose ministry included Christian unity.

Father Wattson - an Anglican who later converted to Catholicism - assisted at St. Barnabas while part of a group of Episcopalian priests who lived in community in Omaha, said Father Robert Scheiblhofer, parochial administrator for St. Barnabas...

Posted by Steve Cavanaugh at 3:16 AM