The June issue of The Portal Magazine has been published online

The June issue of The Portal Magazine, the official monthly journal of the Ordinariate of Our Lady of Walsingham in the UK has been posted. 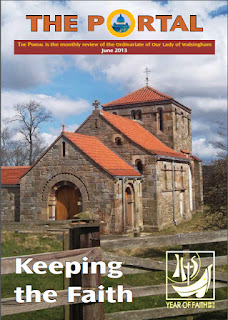 Always an interesting and enjoyable read, it contains a nice introduction to Miles Coverdale in its Anglican Luminaries column. Coverdale was a translator (from the Vulgate and the German Bible) of the Bible into English, and his version of the psalms continues to be the version used in the Book of Common Prayer (and The Customary of Our Lady of Walsingham) and in a slightly altered form, that of the Book of Divine Worship.

The final page has an interesting article on the likelihood of homosexual marriage being legislatively approved in the UK, noting that a first step to this was changing the definition of marriage from "the joining of one man with one woman, forsaking all others until death do us part”, by eliminiating the “till death do us part” (shelved with easy-to-get divorce). This legislation, like similar legislation passed by some U.S. states is now doing away with the “one man and one woman” bit as well. The article notes that "in order to facilitate this change, such concepts as adultery and consummation have, I believe, been abolished. This should give the game away, but no, the modernisers just carry on regardless."
Posted by Steve Cavanaugh at 12:15 PM