William Oddie on the Sisters from Wantage 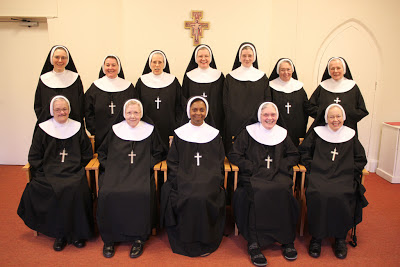 
...This is a moment of some historical significance, for the Community of St Mary the Virgin was one of the earliest religious communities to be founded in the Church of England since the dissolution of the monasteries by Henry VIII. The community was founded, its website tells us, by William John Butler, the vicar of Wantage, and he, together with Mother Harriet, the first Mother, left their mark on the community. From the beginning, there was an emphasis on simplicity of life; one of the earliest sisters had an hour-glass to time her hour of prayer, as she felt that owning a watch was incompatible with a vow of poverty. As a community dedicated under the patronage of Mary, they set themselves to obey her words, “Whatever he says to you, do it”, and the community motto, engraved in Latin on each sister’s cross, is “Ecce ancilla Domini, fiat mihi secundum verbum tuum” – “Behold the handmaid of the Lord; let it be to me according to Your word.”

The community has been a faithful concrete manifestation of what John Henry Newman called for in his Tractarian period, in order to bring about the revitalisation of the Church of England...

The Community of St Mary the Virgin, one has to say, has over the years been one of the most admirable manifestations of the Anglo-Catholic tradition which sprang from the movement whose greatest and most inspirational leader the Anglican Newman had been; and the fact that the Community is, in its Anglican manifestation, now in its closing years (for it can be said with some certainty that the Anglican community will have come to an end with the death of its last sister, and that any new vocations will be to the Catholic community now crossing the Tiber) mirrors exactly the historical situation of that part of the Anglo-Catholic movement which remains within the Church of England. This will become progressively more enfeebled as the Church of England itself becomes more and more secularised: and it is now, surely, time for those within it still trying to live their lives within the Catholic tradition to come home to the place that has been prepared for them.

Read the whole story at the Herald.
Posted by Steve Cavanaugh at 7:11 AM