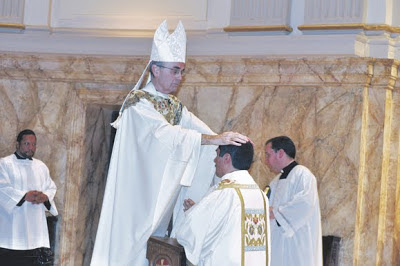 “I’ve been in discernment about returning to the Catholic community for many years,” said Father Gonzalez y Perez. About four years ago, with the full support of his wife, he began taking the first formal steps toward reunion.

Born in Sunset Park and of Puerto Rican descent, Father Gonzalez y Perez was baptized a Catholic as an infant at Our Lady of Perpetual Help Basilica, Sunset Park, but became an active participant in Pentecostal youth groups.

He received his bachelor’s degree in philosophy from State University of New York-Empire State College in Saratoga Springs. He went on to receive a master of divinity degree and a master of arts in religion, with a focus on systematic theology, from Gettysburg Seminary in Gettysburg, Pa. While in seminary, his studies included courses at Catholic schools such as Catholic University, Washington, D.C.; the Oblate School of Theology, San Antonio, Texas; and St. Vincent de Paul Seminary, West Palm Beach, Fla.

He was director of pastoral care at Long Island College Hospital, Brooklyn Heights, and was a non-stipended pastoral associate at nearby Grace Church until becoming Catholic this fall. He hopes to continue in hospital or prison ministry...

Read the rest at the web site of the newspaper of the Brooklyn diocese, The Tablet.
Posted by Steve Cavanaugh at 5:11 AM