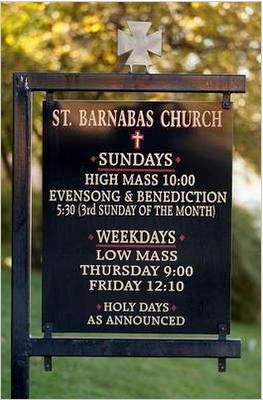 An Omaha congregation that left the Episcopal Church over issues of doctrine and homosexuality now faces a tough decision about its midtown church: Should congregants stay or should they go?

A judge ruled last week that the people of St. Barnabas Church must surrender the 97-year-old church building, with all its artwork and other trappings, plus its rectory and other property to the Episcopal Diocese of Nebraska.

The ruling by Douglas County District Court Judge Joseph Troia came more than three years after the diocese sued St. Barnabas' priest and leaders for the church and rectory at 129 N. 40th St. It is one of many such property disputes around the nation between the Episcopal Church and disaffected congregations.

The judge's order gives the St. Barnabas congregation, which is moving toward joining the Roman Catholic Church, until late October to hand over the keys. But the diocese's lawyer, D.C. “Woody” Bradford, said it won't push to enforce that deadline.

People on both sides said they hope for negotiations that could lead to the congregation's staying in its current home, though not as an Episcopal church. St. Barnabas leaders also are considering an appeal.

“What we're hoping is that now that they have won the lawsuit they'll be more willing to sit down with us and talk about what's real,” said the Rev. Robert Scheiblhofer, rector of St. Barnabas...

Read the rest at the Omaha World Herald.

Another article with a different slant can be found on the website of Fox42 News. (Note, the article repeatedly refers to the "archdiocese" of Nebraska, which is a mistake, as there are no archbishops in the Episcopal Church in the U.S.; this is probably a conflation with the Catholic Archdiocese of Omaha, which may be more typically part of the news cycle.)


"Property has been taken away from an entity here that was never in court," said John Chatelain.

Last week, a judge ruled that St. Barnabas belongs to the Episcopal Archdiocese of Nebraska. That means, since the church no long associates itself with Episcopalian beliefs and practices, the church keys-and everything inside-belong to the archdiocese.

"Not only has the plaintiff sued the wrong people, but they have failed to sue the person of the entity that owns the property," said Chatelain, the attorney for St. Barnabas.

The Archdiocese filed a lawsuit against seven defendants three years ago. At the time, a little over half were part of the governing body of St. Barnabas. Now, Chatelain said, none of them are church officials.

"Parish corporation has never been named as a defendant-and the property has always been held by the ‘wardens and vestry' of the Church," said Chatelain...

That's one of the many reasons why Chatelain said he plans to appeal the ruling.

Hat tip to Sean Reed and Michael Thannisch on Facebook
Posted by Steve Cavanaugh at 9:30 AM