Final Issue of The Link is published 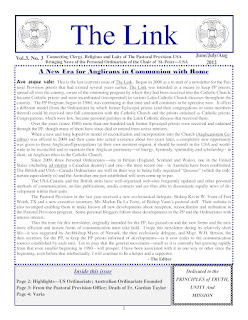 The final issue of "The Link", a newsletter for the Pastoral Provision has been posted. Msgr. Hamilton writes, in his opening article:


Ave atque vale: This is the last (current) issue of The Link. Begun in 2008 as a re-start of a newsletter for the Pastoral Provision priests that had existed several years earlier, The Link was intended as a means to keep PP priests, spread all over the country, aware of the continuing program by which they had been received into the Catholic Church, became Catholic priests and were incardinated (incorporated) in various Latin Catholic Church dioceses throughout the country...the time for this newsletter, originally intended for the PP, has passed on and the new forms and the new more efficient and instant forms of communication must take hold. I hope this newsletter during its relatively short life—it was suggested by Archbishop Myers of Newark, the then ecclesiastic delegate, and Msgr. W.H. Stetson, the then secretary for the PP, to keep the PP priests informed of developments—as it now cedes to the communication sources established by each unit (i.e., the Pastoral Provision and the individual Ordinariates). Let us pray that the general movement—small as it is currently but growing rapidly from that even smaller beginning in 1980 - will prosper. I have been associated with it in one way or other since the beginning, even before that intellectually. I will continue to be a helper and a supporter.

Many thanks to Msgr. Hamilton and his staff for their years of service. The entire archive of The Link is available on the Articles and Tracts page of the web site of the Anglican Use Society.
Posted by Steve Cavanaugh at 3:43 AM