is profiled in a slideshow at the Mobile Press Register 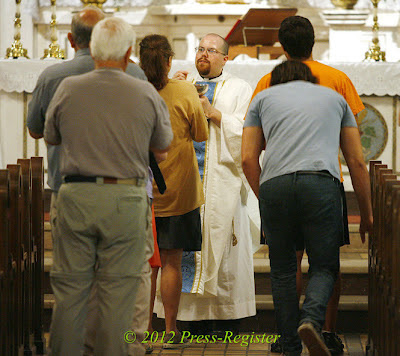 The Rev. Matthew Venuti celebrates a morning Mass at St. Mary's Catholic Church on Wednesday, June 6, 2012, in midtown Mobile, Alabama. After growing up atheist, Venuti found his way to religion and joined the Episcopal church and became a priest, but soon realized his true calling was to be Catholic. He was ordained on June 2, 2012, as a Catholic priest. He and his wife, Minerva, have a 6-month-old, Peter -- which puts Venuti in a small but growing circle of married Catholic priests with children.

Posted by Steve Cavanaugh at 3:41 PM