Christ the King is the largest Anglican church in the U.S. to make the switch 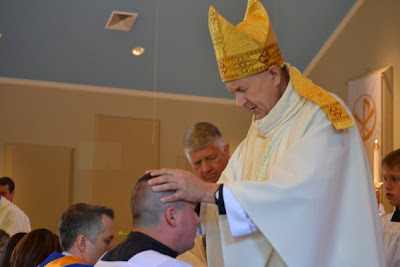 The Rev. Edward Meeks and his flock attended to a "million and one details" last week in the run-up to a momentous day for their church. People to talk to. Flowers to arrange. Food to cook. And, of course, the new sign.

The Towson congregation of about 140 is one of the first groups in the United States to join a new "ordinariate" established for those who want to be Catholic but hold on to Anglican traditions. The largest Anglican church in the country to do so, it follows in the footsteps of Mount Calvary Church in Baltimore and St. Luke's Parish in Bladensburg...

Read the rest of the story in The Baltimore Sun.

Hat tip to the Personal Ordinariate's Facebook page
Posted by Steve Cavanaugh at 4:18 AM