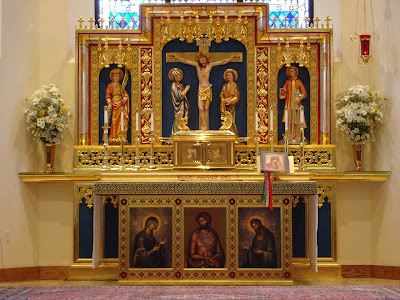 Four months since its establishment by Rome, the Stateside Ordinariatefor Anglican groups entering Catholic communion is coming off a banner week, the first of many soon to come.

On Saturday, two top-tier American prelates each ordained a former Episcopal priest to the transitional diaconate, bringing the Chair of St Peter's officially on-deck group of priests-in-waiting to three. The once-and-future Fathers Jason Catania and David Ousley respectively lead the freshly received communities in Baltimore and Philadelphia, the latter of which completed its journey during Holy Week.

Another onetime Anglican priest, now Deacon Jon David Chalmers became the Ordinariate's first cleric during the Easter Octave in South Carolina, and will be ordained a Catholic priest on June 3rd. Last Tuesday, meanwhile, the circumscription that covers all entering Anglican groups in North America likewise incardinated its first priest -- Fr Eric Bergman, a married father of seven ordained for the diocese of Scranton in 2007 -- as well as completing the purchase of a church for his community, which had been sharing space with a local parish.

Beyond the trickle of founding clerics, some 60 candidates for orders have been cleared for the pipeline over the last several months, half of them said to be preparing for imminent ordination to diaconate and priesthood. Among them, late this month brings what'll likely be the largest single ordination rite as -- in the region long known as the cradle of American Anglo-Catholicism -- Bishop Kevin Vann of Fort Worth makes Catholic deacons of six former Anglican clerics.

Including the unprecedented priesting of a father and son together, the sextet will be ordained on June 30th, and one of the men has already been named the next pastor of the Ordinariate's "principal church" (effectively its cathedral), Houston's Our Lady of Walsingham parish, effective July 1.

Upon their approval for orders by the Congregation for the Doctrine of the Faith, all the candidates have taken part in a rapid-formation course, mostly conducted online from Houston's St Mary's Seminary and University of St Thomas.

Reflecting the rise of the Southern church and Texas' longtime status as the dominant venue of the Anglican communities which have journeyed to Rome on these shores, the Ordinariate is American Catholicism's first national entity to be based outside the traditional centers of ecclesial influence in the Northeast and upper Midwest...

Read the entire post at Whispers in the Loggia. (And note that he picked up my video of Msgr. Steenson's talk in Beverly!)
Posted by Steve Cavanaugh at 5:45 PM