American Ordinariate Gets Its First Priest 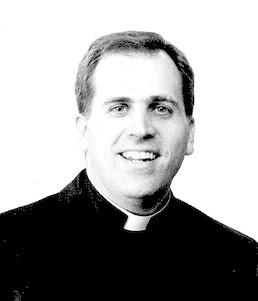 The new U.S. ordinariate for Anglican groups entering the Catholic Church achieved a milestone on May 8, 2012 when Reverend Eric Bergman of Scranton, PA became its first priest. The Ordinariate of the Chair of St. Peter was established by Pope Benedict XVI on January 1 in response to repeated requests by Anglican groups and clergy who were seeking to become Catholic. The ordinariate is similar to a diocese, though national in scope.

Fr. Bergman, 41, is a former Episcopal priest who was ordained a Catholic priest five years ago for the Diocese of Scranton. Since that time, he has been chaplain to the 150-member St. Thomas More Anglican Use Society.

The group will become St. Thomas More Parish at St. Joseph Church and will be located at the former St. Joseph property in Scranton's Providence neighborhood starting in late August. The ordinariate purchased the property from the Diocese of Scranton for $254,000, with $200,000 of that amount raised by the St. Thomas More community during a three-week period this spring.

"This is a significant moment in the young history of the ordinariate. I am grateful to Bishop Joseph Bambera and to the Diocese of Scranton for their support," said Monsignor Jeffrey N. Steenson, the Ordinary. "The incardination of Fr. Bergman, and the reception of several Anglican communities across the United States and Canada over the past few months, are tangible signs of Christ at work in this new undertaking."

Approximately 60 current or former Anglican priests are preparing to be ordained Catholic priests for the ordinariate, with 30 ordinations expected in the next few months. Ordinariate parishes will be fully Catholic while retaining elements of their Anglican heritage and traditions, including liturgical traditions.

Fr. Bergman noted, "I am particularly grateful to Bishop Bambera, and to Msgr. William Feldcamp, pastor of St. Paul's Parish and St. Clare's Church, who has been instrumental in the maintenance of our ministry over the years. St. Thomas More has thrived, and we look forward to our future as an ordinariate parish."

Underscoring the historic nature of this announcement, Bishop Joseph C. Bambera, Bishop of Scranton, commented, "I was pleased to be able to cooperate with Monsignor Steenson in order to help facilitate Father Bergman's incardination process. For the past five years, Father Bergman has faithfully supported the Diocese of Scranton. We are grateful for his service and wish him continued blessings in his ministry."

Fr. Bergman, a native of Bethlehem, PA, graduated from James Madison University before obtaining a Master of Divinity degree from Yale. He was ordained an Episcopal priest in 1997, and served in Scranton as curate at St. Luke's Episcopal Church and as rector of the Church of the Good Shepherd. He became Catholic in 2005 and was ordained a Catholic priest in 2007. In addition to serving as chaplain to the Anglican Use Society, he has been chaplain at Holy Cross High School in Dunmore, PA and at Mercy Hospital in Scranton. He and his wife, Kristina, have seven children ages 6 months to 10 years.

St. Joseph was established as a Lithuanian-language parish in 1895 and is a former home of Venerable Maria Kaupas, foundress of the Sisters of St. Casimir, who was a housekeeper at the parish in the late 19th century. A miracle attributed to her intercession is before the Congregation for the Causes of Saints that, if approved, will lead to her beatification. The parish property includes a church, parish hall, rectory, convent, school, parking lot and four garages.

from the web site of the Ordinariate of the Chair of St. Peter

Posted by Steve Cavanaugh at 7:21 AM