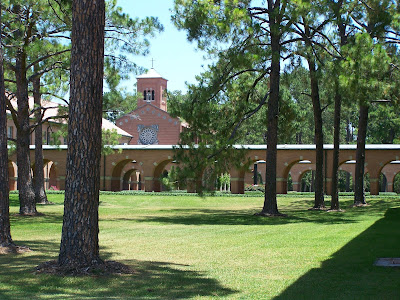 HOUSTON, TEXAS---It's a Saturday in March. While other men are busy with early spring weekend household chores or yard work, 62 Episcopal and Anglican priests head for their computers to make sure the webcam is working and focused, the computer microphone is squelched, and the system's speakers are turned to full volume. It's almost time for another in a series of Ordinariate online Saturday Seminary sessions bringing them one step closer to their cherished goal: the Catholic priesthood.

The weekly-appointed hour for the short intense seminary sessions is 9:30 a.m. Central time. The beating heart of this unique online seminary comes from Vianney Hall at St. Mary's Seminary in Houston. However, the online seminarians are scattered all over the United States and Canada with one military chaplain listening in from Afghanistan. So Houston's 9:30 a.m. is 10:30 a.m. in Virginia, Maryland and Florida, but an early 7:30 a.m. in California. But because it is 8 p.m. in the Afghani desert the military chaplain's online Saturday Seminary session will go into the wee hours of the morning by the time the live Houston session signs off.

This is a transformation unlike any other. The online Catholic seminarians are all previously ordained Episcopal or Anglican or Continuing Anglican clerics who have decided to follow their Anglo-Catholic conscience into the Roman Catholic Church and ultimately seek the living out of their own priesthood as fully-fledged Catholic priests. In order to accomplish this goal, they must undergo some tweaking in their own priestly academic and ministerial formation to gain greater insight into the history, theology, sacerdotal practice of Catholicism, and the soul-etching character of the priesthood.

This is not only a challenge to what they have been originally taught and held deeply as Anglicans, but it is also an unfolding joy to fully discover the Catholic aspects of their priesthood and to mine their own understanding of the deeper dimensions of Catholicism. Focusing on the formation needs in the historic theological divergences in the Catholic understanding of the priesthood, the Houston seminary has devised an intense nine-month program of religious studies for those previously trained Episcopal and Anglican priests who are seeking to continue their priesthood in the Catholic Church...

Read the rest on Virtue Online.
Posted by Steve Cavanaugh at 2:56 PM