by Paul Nicholls Today at the Church of St. Gregory the Great, Oshawa a number of members of the Anglican Catholic Church of Canada were received into the Catholic Church by Bishop Vincent Nguyen of the Archdiocese of Toronto. Bishop Nguyen celebrated the Anglican Use mass. Former Anglican Church of Canada priests, Fr. James Tilley and Fr. David Garrett were received and assisted as altar servers during the course of the mass. Fr. Eric Rodrigues of the Archdiocese of Toronto also assisted at the mass. Rachel Mahon of Toronto served as the organist and Fr. Chris Lepage of the ACCC served as cantor. The mass was well attended by friends and family as well as by a number of Roman Catholics from the local Oshawa parishes. A number of members of the Oshawa fraternity of the Secular Franciscan Order were also in attendance. A reception was held after the mass at the Church of the Good Shepherd. The group from now on will be known as the Sodality of the Good Shepherd. The congregants of the Sodality are most appreciative of the support they received from the Archdiocese and the clergy and people of St. Gregory the Great Church. Fr. Eric Rodrigues will provide the weekly Anglican Use mass until former Anglican priests are ordained... 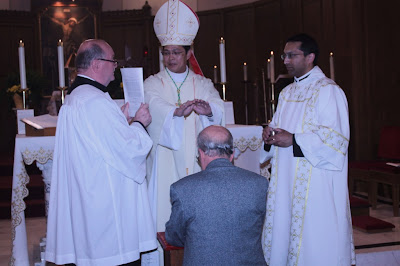 Read the full report with photos of the reception in Oshawa, and the continuing life of the new ordinariate group in Ottawa at Deborah Gyapong's blog Foolishness to the world.
Posted by Steve Cavanaugh at 4:56 AM