‘Bells of Peace’ to ring in troubled neighborhood 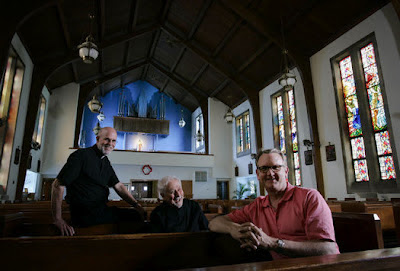 The Rev. Ernie Davis (from left), Bruce Prince-Joseph and the Rev. Jeffrey Hon have worked
together to rejuvenate an electronic carillon in its new home,
St. Therese Little Flower Church.

A rare and vintage electronic carillon, a Kansas City treasure known as the Bells of Peace, first rang from the Liberty Memorial in 1961.
It was a gift from Joyce C. Hall for the memorial’s rededication, attended by Presidents Truman and Eisenhower. The carillon, a collection of “bells” played from a keyboard, has twice fallen silent, a victim of its somewhat old-school technology.
So maybe it’s appropriate this spring that the Bells of Peace once again are being resurrected. But this time it’s away from downtown, in a part of the central city dubbed Kansas City’s Murder Factory in a series by The Star, which found the 64130 ZIP code was home to more convicted murderers than any other in the state.
Just last week, police responded to reports of gunfire one evening and found the body of a 21-year-old man in a front yard near 55th and Euclid streets, three blocks from the limestone bell tower, five stories tall, of St. Therese Little Flower Church.
No bell was ever installed at the church, built in 1948. But soon four loudspeaker “horns” will be installed in the tower, and the carillon will chime on the hour and regularly serenade the neighborhood with its orchestra of 405 “bells,” actually brass rods. How soon depends on whether volunteers reviving the carillon can coax sound from some obstinately quiet rods.
“This is a thing of beauty,” said the Rev. Ernie Davis, pastor at St. Therese. “It’s a reminder of the divine, of God’s presence.”
No doubt people’s lives in these city neighborhoods are troubled by poverty and violence and struggles of all kinds, he said. The bells will be a signal of hope, Davis said....

A few months into the installation at St. Therese, McDonald, who again was enlisted to help, died suddenly. Hon is trying to complete the work, with the assistance of electrical engineer Brian Haupt, but they have hit a snag.
A large number of the bells, including the robust Flemish bells, refuse to ring, and they aren’t sure why. Hon said he would welcome input from anyone with ideas, particularly those with experience in vacuum tube and amplification technology from the 1950s and ’60s.
Initially the hope was for a carillon concert on Easter. But although many of the bells are working, Davis and the others didn’t want to showcase the carillon until it was in full voice.
Davis has confidence the carillon’s final crankiness will be resolved and the parish, active in the community, will be able to present its new gift. St. Therese serves about 220 families, provides charitable ministries including a food pantry and utility assistance and offers a Gospel Mass and a form of “High Mass” on Sundays. Its former parish school houses Hogan Preparatory Academy Middle School.
“I think that St. Therese — not the church, but the saint — is interested,” Davis said. “I think she’s pulling strings.”

Read the entire story at The Kansas City Star.

Posted by Steve Cavanaugh at 6:51 AM