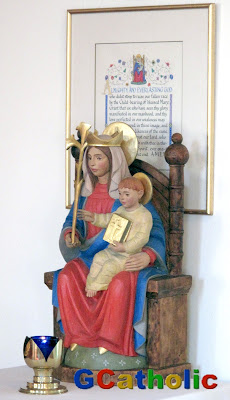 With Benedict XVI's apostolic constitution Anglicanorum cœtibus (and complementary norms), personal ordinariates can be established in countries where sufficient number of Anglicans wish to enter into communion with the Catholic Church. Similar to a Diocese, an Ordinariate possesses public juridic personality in Canon Law, and has jurisdiction of possibly a whole country. These Ordinariates can celebrate the Holy Eucharist and other sacraments according to the Anglican tradition which have been approved by the Holy See.

Canada does not have sufficient members to form a personal ordinariate of its own. Anglicans from the country will join the Personal Ordinariate of the Chair of St. Peter in the United States, established four months ago. This is only the second ordinariate for Anglicans, with the first one being the Ordinariate of Our Lady of Walsingham in England, established in 2011. The Canadians will form a Deanery within the Ordinariate, under the patronage of St. John the Baptist, who has special significance to Canada...

read the full post at Sacrosancta Ecclesia.
Posted by Steve Cavanaugh at 4:17 PM