Upon This "Rock," An Ordinariate Is Born 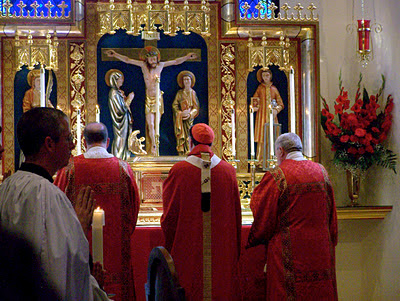 Cardinal DiNardo celebrating Mass
at Our Lady of Walsingham Church during the 2009
Anglican Use Conference in Houston.

Twenty-six months since Anglicanorum coetibus laid the groundwork for groups of Anglicans to cross the Tiber whilst maintaining elements of their liturgical, spiritual, theological and canonical patrimony, the top-shelf papal project has taken a sizable leap this New Year's morning, with as the establishment of the venture's Stateside jurisdiction by the Holy See.

In an unprecedented Sunday announcement -- a significant sign of Rome's degree of seriousness about the effort -- the Vatican's press bulletin gave official word of the erection of the Personal Ordinariate of the Chair of St Peter, encompassing the territory of the United States. The national quasi-diocese for the entering groups is the second of its kind, following England's Ordinariate of Our Lady of Walsingham, which was launched a year ago this month...

Read the rest of Rocco Palma's very complete report at Whispers in the Loggia. 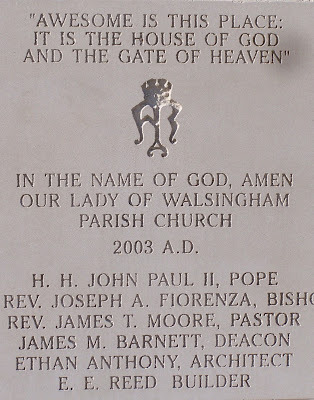 Cornerstone of Our Lady of Walsingham Church
in Houston, TX

Posted by Steve Cavanaugh at 4:00 AM