A towering figure in the Anglo-Catholic movement dies 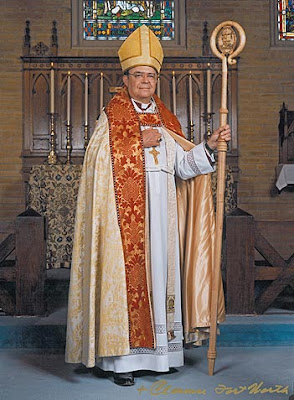 A towering leader in the current Anglo-Catholic movement has died. Former Fort Worth Bishop Clarence C. Pope succumbed to pneumonia in his sleep Saturday, Jan. 7.

Bishop Pope was the long-time rector of St. Luke's Episcopal Church in Baton Rouge before being elected in 1984 as the bishop coadjutor in the Episcopal Diocese of Fort Worth. He stepped into the diocesan bishop's roll in 1986 as the second bishop of Fort Worth, taking over the diocesan croizer from Fort Worth's founding bishop, Donald Davies who died last October.

The retired bishop was always a staunch supporter of Anglo-Catholic spirituality in Anglicanism. St. Luke's is a strong Anglo-Catholic parish. Pope kept the Episcopal Diocese of Fort Worth tightly within that religious understanding.

Under Bishop Pope's leadership and guidance the Diocese of Fort Worth was one of the final four Episcopal dioceses that did not ordain women. The foursome included: Fort Worth, Quincy, Eau Claire and San Joaquin.

While Bishop of Fort Worth, Bishop Pope was instrumental in helping St. Bartholomew Episcopal Church in Arlington become a Roman Catholic Pastoral Provision parish. It is now known as St. Mary the Virgin Catholic Church. The former Episcopal parish is slated to become a part of the newly erected Anglican Ordinariate.

Bishop Pope was sympathetic with Arlington's sole Anglo-Catholic parish's Catholic leanings and was instrumental in helping the former Episcopal congregation keep its land and buildings when it became an established Roman Catholic Anglican Use church in the Catholic Diocese of Fort Worth in 1994.

The Anglo-Catholic bishop was also the founder and first president of the Episcopal Synod of America, which eventually folded to Forward in Faith-North America where he served as the first president. Until his death, he remained an ex-officio adjunct member of the FiF-NA Council where he was listed as the President Emeritus.

However, the ecclesial transfer was not a good fit. In seeking to reclaim his priesthood as a Catholic under the Pastoral Provision, Bishop Pope was reportedly black balled by the Catholic Diocese of Baton Rouge Priests' Council and was not ordained a Catholic priest. He was devastated.

After some cajoling by then-Presiding Bishop Edmond Browning and his own successor Bishop Iker, Bishop Pope returned to The Episcopal Church and was reinstated into the House of Bishops. That, too, was not a good fit, and he returned to the Papal flock.

Bishop Pope continued to struggle with his place in the One, Holy, Catholic and Apostolic Church. His heart was Anglican but his soul was Catholic. He lived that tension for the rest of his life struggling to be faithful to the spiritual path God had laid out for him...

Read the rest of Clarence Popes' obituary at Virtue Online

Hat tip to Mary Ann Mueller
Posted by Steve Cavanaugh at 7:19 AM