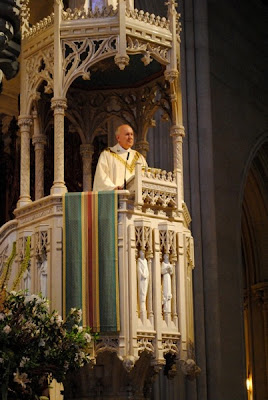 [Ed. Note: My Translation in Brackets]

The Congregation for the Doctrine of the Faith, according to the norms of the Apostolic Constitution Anglicanorum coetibus, has erected the Personal Ordinariate of The Chair of St. Peter within the territory of the Episcopal Conference of the United States of America.

At the same time, the Holy Father Benedict XVI has named as the first Ordinary the Reverend Jeffrey Neil Steenson.]

Lecturer in Anglican Theology, The Lutheran Theological Seminary, Philadelphia.
Member of the Steering Committee of the Evangelical and Catholic Mission.
Assistant, All Saints' Church, Wynnewood, PA (1983-1985).

"Koinonia and Reception: A Response to the Report of the Archbishop of Canterbury's Commission on Communion and Women in the Episcopate" (Episcopal Synod of America, 1989).

"The Teaching Tradition: Scripture and Doctrine" in The Scriptures and Modern Christian Teaching [Proceedings of the Theological Conference 1988] (Charlottetown, 1988), pp. 59-71.

"Patterns of Orthodox Witness: Some Principles from the Nicene Fathers" in Rebuilding the House of God [Proceedings of the Theological Conference 1987] (Charlottetown, P.E.I., 1988), pp. 101-109.

Basil of Ancyra and the Course of Nicene Orthodoxy (D.Phil. thesis, University of Oxford, 1983).

from The Vatican News Service.

Posted by Steve Cavanaugh at 5:20 AM