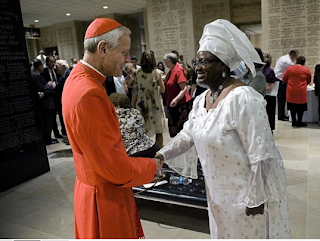 The Rev. Mark Lewis awoke early on the last morning of his life as an Anglican priest and dressed in a suit and tie instead of his usual priestly regalia. That’s different, he thought, for the first of many times on a day when so much was different for St. Luke’s, the small Episcopal church in Maryland where Lewis had been rector since 2006.

On Sunday — with Lewis wearing lay clothing and sitting with St. Luke’s parishioners inside the Crypt Church at Washington’s Basilica of the National Shine of the Immaculate Conception — most of the parish from Bladensburg converted to Catholicism.

In doing so, St. Luke’s became the first Episcopal church in the United States to convert under new Vatican rules meant to attract curious Protestants.

“This truly is a historic moment,” said Cardinal Donald W. Wuerl, the archbishop of the Roman Catholic Archdiocese of Washington, who led Sunday’s conversion Mass, which he called “a joyful moment of completion.”

Posted by Steve Cavanaugh at 6:45 PM