Former Anglican open, joyful as he prepares for ordination 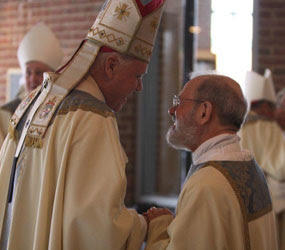 Transitional Deacon Warren Tanghe’s path to the Catholic priesthood may have been long and winding, but the former Anglican priest will be open to all the gifts of the holy spirit as he is ordained June 24 at 6 p.m. in the Basilica of the National Shrine of the Assumption of the Blessed Virgin Mary in Baltimore.

“I prayed before my diaconate that the Lord would give me anything that was lacking in diaconal character,” said Deacon Tanghe, who was a member of the Anglican Church for 37 years. “I prayed that the Lord would renew and refresh those gifts he had already given me for diaconal ministry and that he would pour out upon me in their fullness anything that might be lacking. And that is my prayer going into the priesthood as well.”

Born in Kyoto, Japan, to a Catholic father in the U.S. Army and a mother who was Episcopalian, Deacon Tanghe moved every two to three years. Raised in the Catholic faith as his father fought in Korea, Deacon Tanghe, as the story goes, one day asked too many questions about the mosaics that decorate the Catholic church, so the priest responded, “Get that child out of here!”

He and his mother then began attending an Episcopal church...

Read the rest at The Catholic Review

Hat tip to Mary Ann Mueller.
Posted by Steve Cavanaugh at 10:59 AM