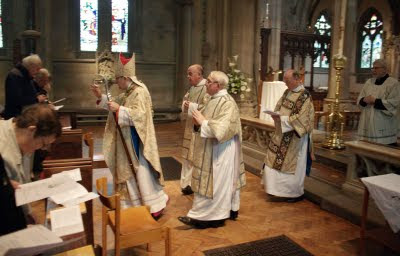 Following the reception of almost 1000 faithful into the full communion of the Catholic Church during Holy Week, this week sees the first of twenty-four ordinations which will take place across the country between now and July. At the request of the Ordinary, Monsignor Keith Newton, Bishop Alan Hopes ordained Professor Allen Brent and David Skeoch to the diaconate in the church of Our Lady & the England Martyrs, Cambridge, on Thursday morning.

David Skeoch was chaplain to the Bishop of London, Graham Leonard, who later became a Catholic and died last year. He was subsequently Vicar of St Gabriel, Pimlico in the Diocese of London and a Canon of the Diocese of the Murray.

Allen Brent is a scholar of early Christian history based in Cambridge. He has published extensively on Hippolytus, St Ignatius of Antioch and St Cyprian. Both will, God willing, be ordained to the sacred priesthood on 15 June in Norwich Cathedral.