Australian bishop: Have no illusions about classical Anglo-Catholics 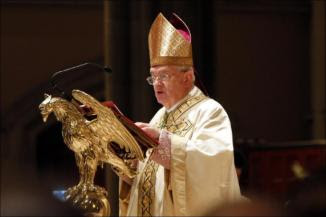 PERTH, Australia (CNS) -- Traditionalist Anglicans who remain in the Anglican Church rather than taking up Pope Benedict XVI's offer of an Anglican ordinariate are wasting their time and spiritual energy clinging to a dangerous illusion, said the Vatican's delegate for the Australian ordinariate.

Melbourne Auxiliary Bishop Peter Elliott, a former Anglican, urged Anglicans at a Feb. 26 festival in Perth to take up the pope's offer of "peace."

"I would caution people who still claim to be Anglo-Catholics and yet are holding back," he told The Record, Catholic newspaper of the Archdiocese of Perth, Feb. 26. "I'd say 'When are you going to face realities?' because there's no place for a classical Anglo-Catholic in the Anglican Communion anymore."

In November 2009, Pope Benedict announced his decision to erect personal ordinariates for former Anglicans who wanted to enter into full communion with Rome while preserving liturgical and other elements of their Anglican heritage, including a certain amount of governing by consensus.

Those coming into the ordinariates are the "last fruits" of the Anglicans' Oxford Movement started in 1833 by Blessed John Henry Newman to restore Catholic identity in the Anglican Church, Bishop Elliott said...

Hat tip to Rev. Kendall Harmon at Titus 1:9.
Posted by Steve Cavanaugh at 4:40 AM