The Anglican Church in America (ACA), one of the largest of the Continuing Anglo Catholic bodies in the US, has issued a letter through its chancellors saying it will not join with its Archbishop, John Hepworth, and accept the Pope's offer of a personal ordinariate.

Bishop Brian Marsh, Diocese of the Northeast, told VOL that this clarifies their situation which has been in some limbo since the Pope's offer due to a number of parishes in the ACA wanting to accept the Anglicanorum Coetibus. "While this clarifies our position at the present time the future remains open. Our leader is still Archbishop John Hepworth but that could change if he should go to Rome."...

There is a desire to separate amicably from those parishes that wish to accept the pope's offer commented Marsh. The bishop believes that about 20% of the ACA will accept the ordinariate. "We do regard this as an opportunity for all Continuing Anglicans to come together, said Marsh. "We are in talks with other Continuing Anglican bodies."

The Chancellor of the ACA today issued a letter at the request of the bishops of the Church clarifying where the denomination stands.

"First, I would like to inform you that the Anglican Church in America shall remain as a continuing Anglican church. Notwithstanding what you may have heard, this church is not going to collapse or disappear. It will, by the Grace of God, continue its important and essential witness as part of God's holy church.

"Second, we would like to advise you as to the situation in the Diocese of the Eastern United States which has been the one diocese most gravely affected by what has happened. As all of you may know, the Bishop of this DEUS (Louis Campese) has elected to abandon his diocese when the diocese refused to go to the Roman Catholic Ordinariate.

The chancellor also wrote that the Constitution and Canons of the ACA are still valid and binding.

"According to our canons, those Bishops, clergy and parishes who leave for another jurisdiction, such as a Roman Catholic Ordinariate or the so-called Patrimony of the Primate, have, at this time abandoned the communion of this church and the ACA.

The full letter of the ACA Chancellor may be read on the ACA web site.

In a commentary released on Virtue Online that raises as many questions as it does answers, the three Diocesan Bishops of the Anglican Church in America who do not foresee entering the ordinariate, write the following:

Dear Brothers and Sisters in Christ,

We bid you greetings in the name of our Lord Jesus Christ.

Recently, because of questionable and possibly irregular episcopal actions that have taken place in both Florida and California, we asked the chancellors of the Anglican Church in America to render an opinion regarding temporal and corporate issues related to the ACA, particularly as concerns the Patrimony of the Primate. The chancellors' decision, released in a letter dated February 5, 2011, has been widely disseminated. It appears on the ACA web pages.

The chancellors' letter contains pointed language; it represents a solid, legal opinion and should inform further discussions as we move forward. Opinions expressed in that document, whether temporal, corporate or ecclesiastical, are advisory in nature and should be regarded as such.

The chancellors' letter emphasizes the state of broken communion in which we presently find ourselves. The Patrimony of the Primate was initially established as a temporary entity to allow for the smooth transition to the Roman Catholic Ordinariate for those so inclined.

It was the expectation that the Patrimony would exercise no diocesan functions, but would respect the established diocesan structures within the ACA. Indeed, the Patrimony of the Primate was envisioned as an entity for those who wished to leave their existing diocese while waiting for the Ordinariate to be formed. Although it was our hope that we all might remain together under the umbrella of the ACA, that now seems impossible.

Those who wish to enter the Ordinariate have engaged in activities that suggest they have begun to operate as a separate jurisdiction. We understand that our brothers wish to move forward on the path they believe is right. We understand their sense of urgency and their commitment to the cause they believe is correct. We pray for them, just as we seek their prayers for us. But we must also recognize and respond to the situation as it presently exists.

An amicable and immediate separation between the Patrimony and the ACA is indeed necessary. It is necessary in order to reduce the tensions and reestablish collegial bonds. This separation will formalize what already exists in practice. Though we may find ourselves in different jurisdictions, it is vital that we part in a spirit of generosity and Christian love. Above all, we must recognize that we are children of God struggling to understand God's call to each of us.

We ask your continuing prayers as we serve as your Bishops, praying that the Holy Ghost may guide us as we make decisions that enable us to serve God's people in the particular places where we have been called.

Visit Virtue Online for any comments on this.

The "irregular" episcopal action in California referred to above was the ordination of Deacon Andrew Bartus to the priesthood by Bishop David Moyer, who was placed in charge of the Patrimony of the Primate. Fr. Bartus writes on his blog Anglican Patrimony:

Speaking of hectic times, I wonder who else in church history can say they have been ordained and excommunicated in the same day? After the ordination, while in the sacristy, we saw this interview. And then the 'official' document posted on the ACA website. Clearly a power play by three junior bishops against their seven elder bishops, they've (presuming the other two agree with Bp Marsh and the chancellors) strangely declared that my ordination and our confirmations the day after are invalid, "null and void effective as of January 1, 2011." 1) Chancellors do not have the authority to make declarations of this sort, and 2) if those bishops adhere to the Branch Theory as they claim, then how are episcopal functions by any bishop in apostolic succession 'null and void'? And 3) can one backdate excommunications? Why January 1, 2011? I should also question the authority of the three bishops. Have those three deemed the seven others as apostate and therefore the three of them must really be the true totality of the ACA House of Bishops? And even though they agreed some months ago to not pursue intercommunion with the APA (read Bp Grundorf's latest Epistle) the APA has received some sort of offer from them anyway!

You may read the rest of Fr. Bartus' post at Anglican Patrimony. 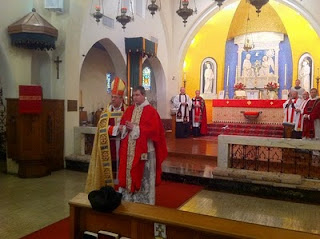 By way of background, St. Mary of the Angels was one of the California congregations of the Episcopal Church which sought to enter the Catholic Church as an Anglican Use parish in the ancient days of the 1980s; unfortunately, the Californian Catholic bishops valued good relations with their Episcopalian counterparts over the desire of these Anglicans for unity with the Holy See. Now, with the advent of the personal Ordinariates, their dream of communion with the Apostolic See is nearing fruition. And now they must deal with interference from their Continuing Anglican bishops. To me it brings to mind the old nostrum that while it is certainly Catholic dogma that bishops are of the esse of the Church, they are not always good for the bene esse of the Church.
Posted by Steve Cavanaugh at 5:51 AM